Do you Mind your page?

Online Reputation Management (ORM) is an enormous topic to cover. It encompasses so many strategies and techniques essential for success. I know it sounds like a complicated task but it is achievable even if you are just one person band working on your own steam. Remember the old saying treat others how you want to be treated? The same applies here. If you want to be successful treat people like they matter. They are ALL important to the success and growth of your company or endeavor.

Often page owners are caught up in the passion of the moment, don’t get me wrong can be a beautiful thing! passionate posts can inspire hearts, minds and growth! both in yourself and in others. However passionate postings with negative remarks can do the opposite. The worst possible thing you can do is rant (negatively) about your competition, other people, politics, religion and your above all else your supporters and customers.

I have a bad example of Online Reputation Management to share with you. Have you heard of Amy’s Baking Company? They were made infamous by their appearance on Gordon Ramseys’ Kitchen Nightmares. You can read up on the story here is your unfamiliar with it. The owners of Amy’s Baking Company blamed their fall in business on staff and believed they were innocent of any wrong doing. Despite being verbally abusive towards customers, badly produced food, irregular open times, and treating staff badly .. In spite of this they still would not take responsibility for their actions.

In the episode Gordon Ramsey left them and saying they were the first owners he could not help. From there, as I understand it, they blamed him as well. You can watch the full episode on YouTube here

However, the story doesn’t stop there, unfortunately. From this point the owners then took to social media to insult and degrade their customers.

I wont post more but these give you the general idea. Amy’s Baking Company later on did claim they were hacked and had not made any of the social media posts however the amount of available evidence does suggest otherwise.

To their credit I have seen numerous reviews stating the food was wonderful and the owners delightful people but these remarks are over shadowed by the reputation nightmare they have attracted. It is unfortunate however, for without the proverbial storm caused by their social media postings they may have done well for themselves. After the Kitchen Nightmares episode their shop became somewhat of a tourist attraction attracting customers from all over

Amy’s Baking Company did open another store on May 21, 2013. However even with the assistance of a professional publicist to assist with damage control their Scottsdale restaurant closed a little more than two year later in September 2015. According to Az Central and their Timeline of Amy’s Baking Company in Scottsdale The owners decided to maintain the company name for the possibility of future business ventures.

There is so much they could have done to rectify the situation, even though it would have taken a long period of time to do so, atleast they would not be out of business. As the old saying goes ‘an apology goes a long way’. Here are a couple of options they could have pursued:

There are a number of other examples of poor Online Reputation Management with similar traits. Deleting comments, hiding reviews, ignoring complaints, verbally attacking customers online. There are also immense examples of sensational reputation management. One of my favorites is from Aldi UK. A customer made a witty complaint about a chocolate digestive biscuit that was sadly missing its chocolate. Here’s the complaint.

Take note of the likes and shares on the complaint. This situation if handled badly could have become nightmarish! Some may question why go to the trouble over making a complaint about a cookie, consumers & customers are well within their right to make a complaint.

So How did Aldi respond to this complaint, with equal amounts of wit ofcourse and offering to replace the packet and throwing in an additional bag of sugar for good measure. Which were all delivered to the customer the following day.
There well produced response earned them public acclaim, good will and no small amount of free advertising.

Here is the response. 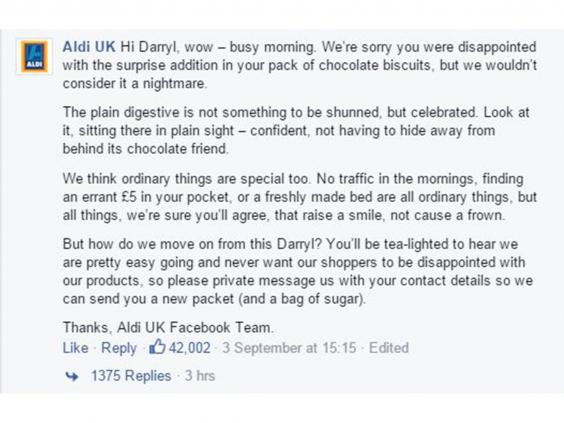 In short whether you utilise social media through Facebook, Instagram, Pinterest, YouTube or LinkedIn or if you blog it is always advisable to support your supporters. This activity will go a long way in increasing your own reputation and brand/page recognition while your helping them with theirs. It will aid in developing a regular audience who will continue engaging with you and your page.

Our Services
Promotions
Meet the Team
Message Us ! !